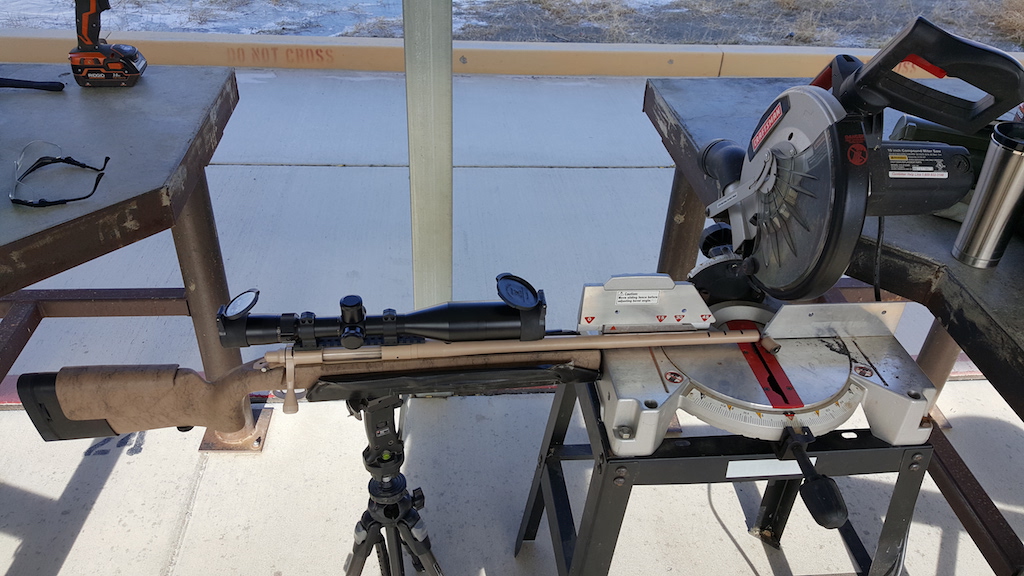 Palomino Valley Gun Club Member, Addison Mohler, conducted an experiment where he explored the effects of barrel length as it relates to bullet velocity and accuracy. The following is as writeup of the methodology and findings.

As a rifle barrel is systematically shortened, the muzzle velocity will remain relatively constant then drop off when the length at which the powder is not completely burned is approached. Additionally, as the barrel is shortened, precision will improve.

I shot out the barrel on a 6.5 x .284 tactical rifle and my gunsmith had a suggestion that I do a little experiment since the barrel was not serviceable anymore but could still provide some valuable information. The undersides of awnings that cover shooting benches have heard years of lighter than air suggestions that shorter barrels are inherently more accurate but longer barrels lend to more complete and consistent powder burn. I decided to cut my barrel down systematically and record the results. It is hardly the first time that this has been done and a cursory search on the internet will produce similar write ups of similar experiments as seen below:

These are all a bit different with varying hypotheses but much of the findings correspond to the widely-held belief that a shorter barrel is more accurate and that finding a suitable length to fit your cartridge of choice is a worthwhile endeavor. A few advantages of a shorter barrel outside of reduced “barrel whip” include the fact that they are lighter, easier to pack, easier to wield and aesthetically pleasing.

The first step is to shoot out a barrel. One of the articles above started with a new barrel which seems like a waste to me. In this test, the rifle was shot from a bench and included the following equipment.

The rifle was set up on the rest and the target stand with removable paper target at 100 yards. The Magnetospeed was attached to the barrel as per the manufactures directions (see Image 1). Three rounds were fired for fouling and zeroing on the target but were not recorded. Then five rounds were fired at a specific spot on the target to establish a control group with the intact barrel. This group is denoted as the 26-inch barrel in Table 1.

As an aside, I had a request to do another experiment within this one and destroy the intact crown of the barrel to see what impact that had on precision. A steel, course grade rasp and a hammer was used to damage the crown leaving chunks missing and burrs protruding into the bore (see Image 2). Another five shots were fired and recorded as 26C in Table 1.

After these initial shots were fired and results recorded the foremost inch of the barrel was cut off using the chop saw (see Image 3 and 4). Each inch was measured with a metal tape and marked with a Sharpie before coming to the range. After the barrel was trimmed, the new crown was chamfered using the Rigid impact driver and the ½” countersink bit (see Image 5).

Summarized results are presented in Table 1.

The first note is to the damaged crown at the 26-inch length. It looks as if that damage doubled the size of the group. However, the control group was exceptionally small and this may make the results deceiving. Even with a significantly damaged crown on a shot out barrel, this group is under an MOA. The .8-inch group is better than some of the other groups that were shot from a chamfered crown (see Chart 1). This crown was destroyed and it had arguably negligible effect on the point of impact or the group size. The take away message here is that letting a brass cleaning jag pop out of the bore and letting it land on the crown while cleaning will probably not cause any damage that will result in the loss of precision.

The main experiment had similar results to those in similar tests (links above). The velocities experience a fall off at a steady pace until a certain length is reached and then fall off precipitously. Presumably, this happens when the barrel is no longer at a length where the powder within the cartridge case can effectively complete its burn. In this particular rifle (and barrel) that length is around 22 inches. In fact, the total loss of velocity from 26 inches to 22 inches is only 48 feet per second. Cutting off the next inch (22 to 21 inches) results in a loss of 39 fps and then the following inch (21 to 20) losses 75 fps (see Table 1). This experiment supports the first part of the hypothesis above.

One thing to note is the velocity extreme spread (ES) once the saw was taken to the barrel. The first two scatters (Chart 1) are nice and tight and everything after that is noticeably spread out. I do not have an explanation for this. When you remove the high and low velocity for each group, the ES is consistent with smaller group sizes.

The group size (blue line in Chart 2) trend line is consistent with what we see when working up loads to fit a barrel. The wave-like trend indicates that nothing abnormal is going on and that groups are either better or worse as the bullet exits the muzzle and spreads out according to the harmonic movements of the barrel. Note that at 23 inches the groups size is only .011 inches greater than the intact 26-inch barrel. If I am looking for a precise barrel that is lighter, easier to maneuver and more aesthetically pleasing I would have a strong argument for a 23-inch barrel rather than a 26-inch barrel.

This test does not support the second part of the hypothesis presented. The data collected does not show any improvement in the precision of the rifle/barrel as it was shortened. A different experiment and different design would be needed to further test this hypothesis.