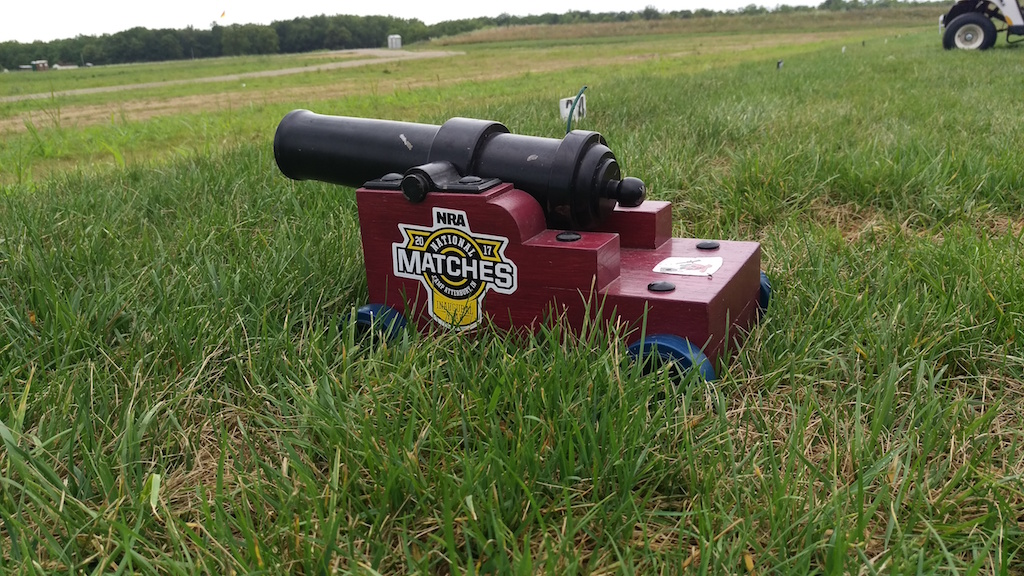 PVGC Member Ben Lucchesi recently participated in the NRA National Long Range Championships at the US National Matches held at Camp Atterbury from July 21 through the 25th, 2017. Camp Atterbury is located in Edinburg, Indiana 45 minutes South of Indianapolis. This is the first time the NRA National matches have been held at a venue other than Camp Perry in over 100 years.

Overall the venue was well suited for these matches. Range 6, where the match was fired, has 50 points with approximately twice the distance between points as those on the long range at the WCRSF. Sod was freshly laid on the firing line which made shooting comfortable and helped mitigate mud resulting from occasional PM showers. The pits were clean with ample room to work the target carriers all of which were in good working order. Air conditioned vans were used to transport competitors to and from the pits to perform target duties.

On-base accommodations were made available to participates and their families. Room options included single rooms in barracks, single bed hotel rooms, suites, cabins and camping. For those that didn’t want to stay on base, several hotels were a short 15 minute drive away. Laundry facilities were plentiful and free.

Weather for the duration of the matches was generally hot and humid. The match directors worked hard to start each day on time and run as efficiently as possible so as to avoid shooting during the hottest part of the day. Despite these efforts, due to the format of the matches afternoon shooting was inevitable. On day Sunday the 23rd, the weather took a turn for the worse and rained for several hours after relay 2 delaying the match till 2:00 that afternoon and pushing the team match scheduled for that afternoon to the next day.

For us folks from Nevada and other desert climates, the humidity was beyond comprehension. Being prepared for the climate was key factor in being able to shoot effectively. Light, sun resistant clothing that dries quickly was extremely important. Bug spray was also necessary. Generally, mosquitos weren’t a problem at the firing line in a breeze, but in the pits during the early hours when the air was cooler, they were definitely a nuisance. Ticks were also of concern, so spraying ankles and shoes was important.

Operationally, the match ran very smooth. Squadding was posted on a bulletin board both at the range and the statistics office the night before each match so there was no confusion as to where and when it was your turn to shoot. Scores were posted promptly both on the bulletin board and on the NRA website.

The format of each match is more like a tournament than just shooting for high score. After each competitor has shot in their relay for the match, the high scoring shooters from each relay (and rifle category) are brought back to compete in a shoot-off consisting of 3 sighters and 10 shots for record.

After arriving on-base and checking in with the entry office, I checked the bulletin board to see if anyone needed to fill out a 4 man team. Coincidentally, a acquaintance from Colorado, Adrian Harris, who I know from shooting the South West Nationals in AZ, had placed such a notice. I called immediately. Adrian told me that he actually needed two people so we both needed to start asking around. Later that evening I stopped by the on-base bar for a beer where I ran into another acquaintance, Rus Theurer, who I also know from shooting in AZ. I told him I was looking for a 4th man at which point he told me he was looking for a team to coach. Rus signed on and helped us find our 4th shooter and the rest, as they say, is history.