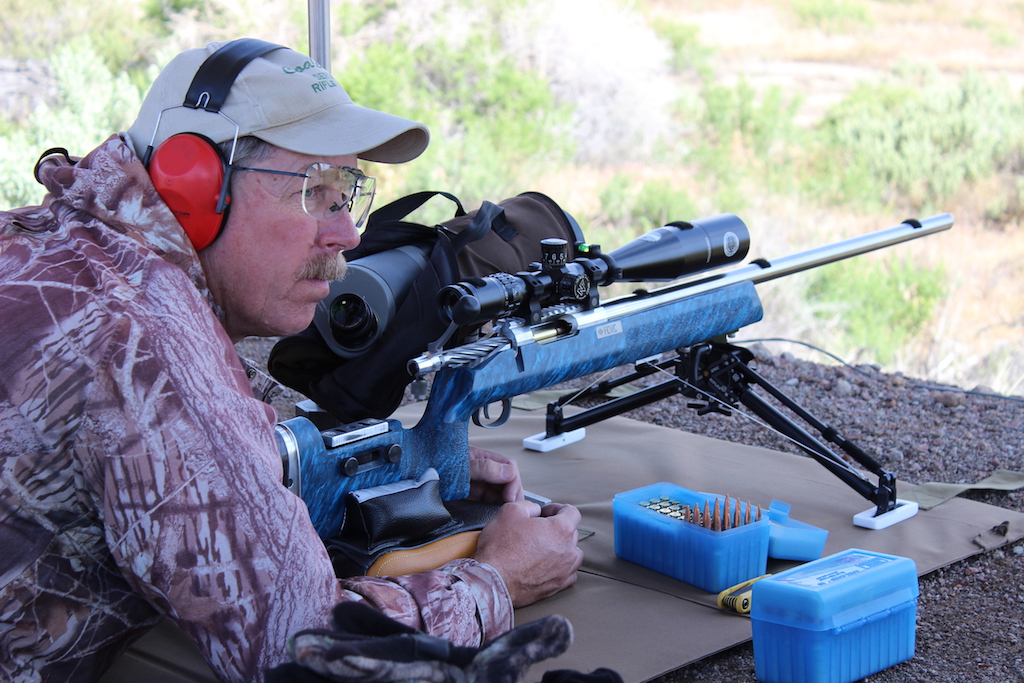 On May 25-28, 2018, Palomino Valley Gun Club hosted the Nevada State Long Range Championships – the first Nevada State Championship held in over 20 years and the first under the recently formed state association, the Nevada Firearms Coalition. With both sling and f-class shooters in attendance, this was also the largest high power match Palomino Valley Gun Club has held in recent memory. Despite ambitious goals and the series of firsts, the match was an overwhelming success.

This match was held at Palomino Valley Gun Club’s home range, the Washoe County Regional Shooting Facility, located 30 miles North of Reno, Nevada in Palomino Valley. The altitude of the valley floor is 4500 feet but the surrounding mountains are much higher. The combination of the mountainous geography, high desert climate, and predictably unpredictable Spring weather makes for extremely challenging conditions.

True to form, the conditions throughout the two days of competition made for interesting score cards. Besides the typically high wind speeds, unsettled weather created fast wind direction and velocity changes. After the match, F-TR shooter, Scott Harris said of the range and conditions,

“The range was Tough with a capital ‘T’. I thought Raton was tough, this is tougher. As Niklas Montin said, the terrain features and high winds combine to make it a real learning experience. Ben Lucchesi said that no records will probably ever be set at this range, except for most misses in one match. I’d have to agree after seeing 6 simultaneous misses out of the 11 targets in the air…more than once…”

At least the shooters were able to take solace in the fact that there weren’t any “magic” relays that favored high scores.

On Friday, practice was nearly a wash-out with rain falling throughout the morning. Despite the precipitation, targets were run up for those who needed to establish a zero. Fortunately the 1000 yard line is covered!

Saturday was an improvement over Friday as the rain subsided and temperatures from the mid 50’s to low 60’s. However, overcast skies persisted and cool misty air made for a dramatic scene and challenging wind conditions as the weather system blew through.

Sunday saw a complete break in the weather with mostly sunny skies and temperatures reaching the low 80’s. Despite the better weather, Palomino Valley dished out more fast changing winds which continued to challenge shooters’ skills.

When all was said and done, the winners rose to the top and we’re pleased to announce the 2018 Nevada State Rifle Champions:

Congratulations to our champions and all the competitors!

For complete listings of scores:

In addition to trophies awarded to the state champions, there were plenty of other opportunities to win. Each of the individual matches comprising the tournament paid $10 to the winners in all divisions (F-Open, F-TR, Palma Rifle, Any Rifle) and classifications (High Master, Master, Expert, etc). With nearly every classification and division filled, over $600 in cash prizes were awarded. Whats more, our corporate and individual sponsors generously donated prize table awards that were raffled off to competitors – no additional entry needed.

On that note, we’d like to mention who our sponsors:

Without their support, we wouldn’t have trophies to award, competitor swag bags to give away, or a prize table. If you have the opportunity, please thank them for supporting the shooting sports and helping to make this a successful event.

Finally, we would like to extend our sincere gratitude to the volunteers who donated their both before the match to help prepare the range, paste targets, and run the actual match, with special recognition going to Ace Tan and Doyle Andrews for running statistics. Thank you all!

To conclude, plans are already underway for the 2019 Nevada State Long Range Championship. We hope to see you here in Nevada in the spring of 2019!