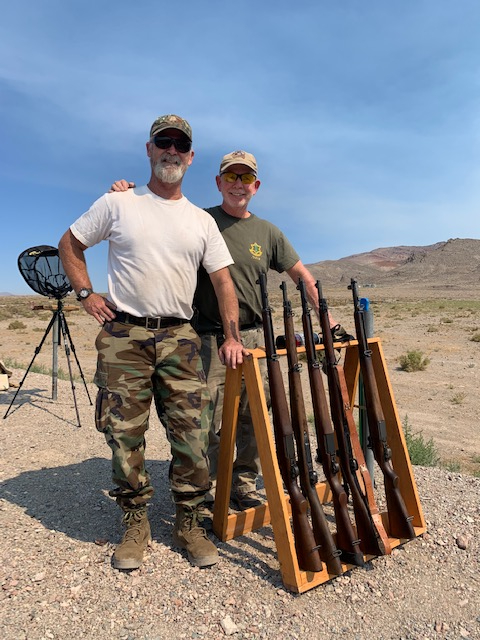 We were delighted to have The England Brothers, Dave and John, join us after a lengthy hiatus, John having traveled from Tennessee, timing his trip to coincide with this match. This was to be their reunion match, brother v. brother. Since traveling such a far distance with a rifle can be problematic, Dave loaned John a M1 Garand (“The one with the bent barrel”).

⊙ The Susanville Crew (Jim B. had a legitimate reason for his absence; Marty overslept!)

⊙ Phil, so the match went off without any surprises.

⊙ Hannah, so the guys slacked-off while unloading/loading the Pig trailer. And no Chicken stands got damaged.

Will and Russel returned, making this their second match, and they both bested their previous scores, with Will earning the pleasure of shooting Chickens offhand next time.

Jim K. had to shoot Chickens, Pigs, and Turkeys offhand, and ended up eating a big slice of Humble Pie. (By the way, Marty and Filipe shoot the entire match offhand every time.) The good news is: our handicapping system works, giving every competitor a chance to take home a ribbon.

Dave R., ever seeking to gain an edge, made of point of mentioning that even though he and Jim K. scored seven Rams down, Dave hit nine Rams. (Admittedly Jim did, on more than one occasion, steal Dave’s line, “Anyone can hit the big parts” as he proceeded to hit Rams in the horn, so yes, two can play PSYOPS.)

Speaking of hits: one of Jim’s offhand shots spun a Chicken a perfect 90 degrees on its stand. At the conclusion of his 10 shots for record, Jim decided to try hitting the Chicken’s facing edge (range: 110 yards), shooting prone. He hit it dead-center on his second shot. (See photo below.)

As is always the case, this was an enjoyable match, with friendly banter, made especially memorable with The England Brothers’ company. Our next match is Saturday, August 21st. New shooters are welcome.

Note: Started by Dave Roberts, September is our optional “Four Gun Match” wherein you’re encouraged to bring four different vintage military rifles, one per stage. Can’t bring four? Bring what you can even if it’s just one (i.e., a normal match). So now’s a good time to start planning ahead.

Any military design rifle with a scope that can be used at 4X or less. Modifications allowed.

Here are the handicap standings (i.e., who is shooting what offhand) for the next match:

Click on any image below to open slide viewer: